"Ke" is the handle of an axe. A woodcutter entered a mountain, saw an old man and a young man playing chess. The woodcutter put down his axe , and stood there watching the chess game. Not too long after, the young man turn to him and said: Should you go home now? The woodcutter turned to pick up his axe but realized that the axe handle was decayed and the sharp knife was rusted. The woodcutter was actually entered a fairyland... One day in the fairyland, the human world has been thousands of years...

2019/2/24
停了一段時間, 今日再度拿出此曲來練習. 越發欣賞此曲作曲者之心思.
Today, I pick up this piece after a long suspend. I enjoy to follow through the notation again, step by step, realizing how the composer (尹爾韜 Yǐn'ěr Tāo, around 1600-1678) arranged his fingers and notes and make this piece very interesting.

2019/11/14
Record my playing on silk strings. I still feel some parts can be interpreted differently. 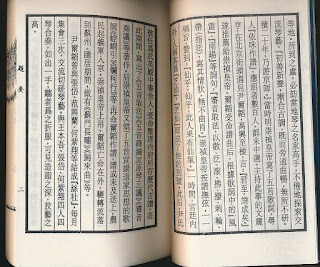 Yin Ye 尹曄, lived around 1606-1685, his style name was  Er'tao 爾韜. The last emperor of the Ming dynasty, Chongzhen Emperor 崇祯, (Zhu Youjian 朱由檢 1611-1644) lured qin masters to work at the Wuying palace 武英殿 for him. Yin Er'tao was recommended by Wen Zhengheng 文震亨 who was a scholar and artist, working at the Wuying palace at that time. (Wen Zhengheng was a Ming dynasty scholar, painter, landscape garden designer, and great grandson of Wen Zhengming, a famous Ming dynasty painter.)

Chongzhen liked Yin's qin playing and compositions very much and bestowed the name "Zhixian" 芝仙. Zhi is a kind of rare herb. Xian means an immortal being.  In 1647, Yin published a qin handbook, Huiyan Mizhi 徽言秘旨, which has collected all the music he studied. In 1692, his student Sun Gan 孫淦 republished the Huiyan Mizhi Ding 徽言秘旨訂, which combined the Huiyan Mizhi and Yin Zhixian Qinpu 尹芝仙琴譜 including several of Yin's compositions. The following list of his compositions were composed after the fall of the Ming dynasty when he was living in seclusion on Sumen Mountain in Henan Province. These melodies convey his regrets and sorrow of losing his country, and was highly respected by many adherents of the Ming dynasty.

夏峯歌 Xia Feng Ge, Song of the Xiafeng (Xiafeng was a village in the Sumen mountain area. This Song has lyrics.)
蘇門長嘯 Sumen Changxiao, Long Roar of Sumen, (inspired by the story of Ruan Ji and Sun Deng who both lived during the Three Kingdom period of China.)
歸來曲 Gui Lai Qu, The Melody of Coming Home (with lyrics)
安樂窩歌 An Le Wuo Ge, Song of Comfortable Nest (with lyrics)
魯風 Lu Feng, Wind of Lu
歸去來辭 Gui Qu Lai Ci, Ode to Coming Away Home (based on Tao Yuanming's poem, with a different melody from other pieces of the same name)

Yin also composed Lan Ke Xing 爛柯行(A Journey of A Decayed Axe Handle), and Can Tong Qi 參同契 (The Kinship of the Three, in Accordance with the Book of Changes)

Yin learned the guqin in his early teen years with Wang Benwu 王本吾. Ming dynasty scholar Zhang Dai 张岱  also learned the guqin with Wang Benwu, and wrote an article [Shaoxing Qin School] 紹興琴派 which mentioned that Wang Benwu's qin style was described as "clean and smooth fingering technique with a little bit of unctuousness". Unctuous means: (of a person), excessively or ingratiatingly flattering; oily. "指法圓靜, 微帶油腔".  Zhang Dai also mentioned that compared to Yin Er'tao's qin playing with their teacher, Er'tao got 80 to 90 percent of Wang's skill but a little bit of "Yu", Yu can mean circuitousness or stubbornness. 爾韜得本吾之八九而微迂  . Zhang Dai also mentioned that he and Er'tao and another student played 4 qins together with their teacher, and the sound came out like from one qin. That shows they played exactly like their teacher. Zhang Dai's article inspired me to discuss a little bit more of the left hand ornamental vibratos of the piece, Lan Ke Xing composed by Yin Er'tao. I believe those vibratos can be the major reason to distinguish different styles and hope to get some closer sense of  what "unctuousness" might sound like. 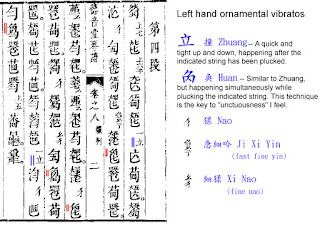