A couple months ago, my friend Yves Seban sent me a link with a bunch of Middle Ages music by Guillaume De Machaut. When I heard the first one which is Douce Dame Jolie, I immediately wanted to try it on the qin. By listening to its melody, I could almost find all the notes on the qin. So I went online to get the staff notation of this song and then worked carefully for the details, as I wanted to make it as a fingering exercise piece. I also listened to several different recordings on Youtube, including this one from La Morra that Yves sent me too. After a few days, I could play the whole song with confidence. After making a couple of recordings myself, I have fine tuned a few notes and then finally have come up with what I played at the 1/3/2021 yaji. This recording I made two days before the yaji.

For the Yaji records, please visit my guqin yaji blog. 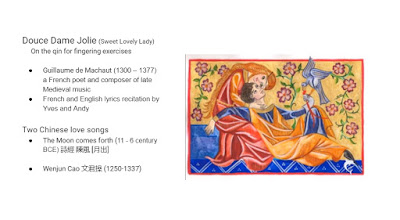 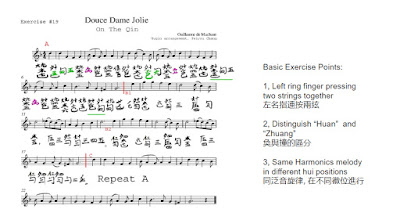 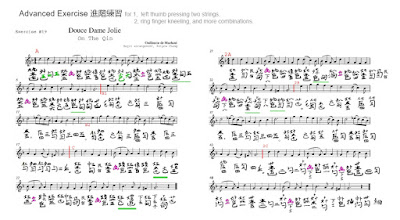 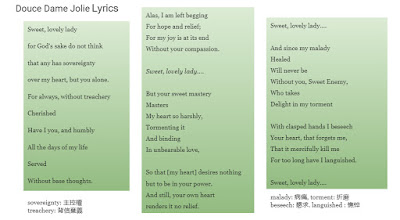 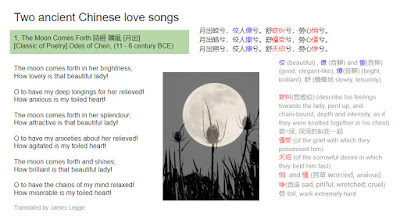 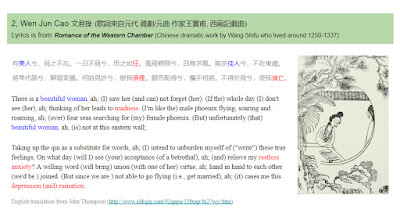 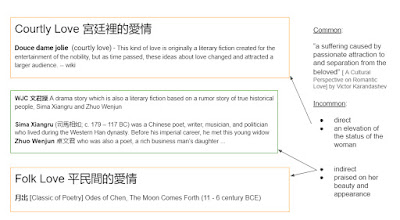 Reference about courtly love and A Cultural Perspective on Romantic Love.
Thanks to Yves provided this link:
https://scholarworks.gvsu.edu/cgi/viewcontent.cgi?article=1135&context=orpc
Marilyn's question during the yaji makes me to review my creation process. I had put some notes down as below. 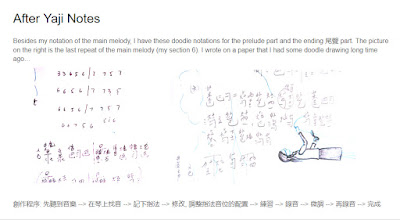 Juni L Yeung
and
Bin Li
Do the "diao 調" and "yi 意" in the ancient Chinese guqin music function as the same idea of western music term of those scales ?
Juni:
Posted by silk on wood 木上絲 at 5:40 AM No comments:

Moon River on the Guqin

This is attributed to a friend who is a young mother with two daughters. She told me that her daughters like to sing this song, so she was wondering if this song can be played on the guqin. Here is my adoption. :)
And the notation 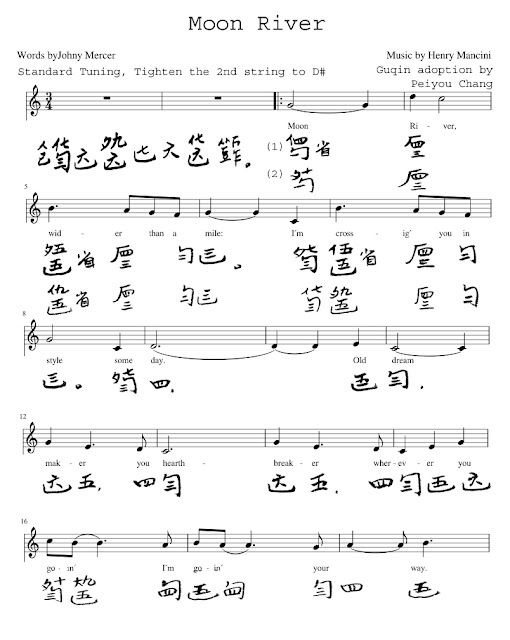 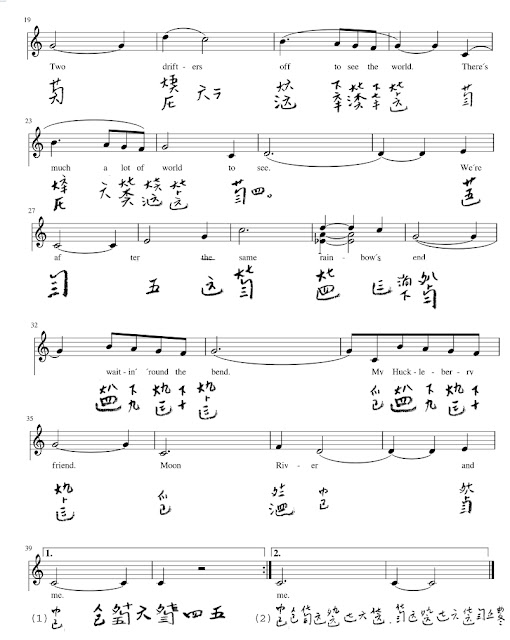 Jue Shao is a flute tone in the Jue Mode (the Chinese Jue is like the western mi or la. Jue mode is that the ending note of major phrases and the final note land on mi or la)

This song was said to be in the mode of Zheng Huang Zhong Gong 正黃鐘宮 , the orthodox Huang Zhong Gong mode, which is similar to the western Lydian mode with one # on the fourth note of the scale.

To play this piece on the cello, I decided to take Pian's interpretation of the key where the first and last notes land on E. 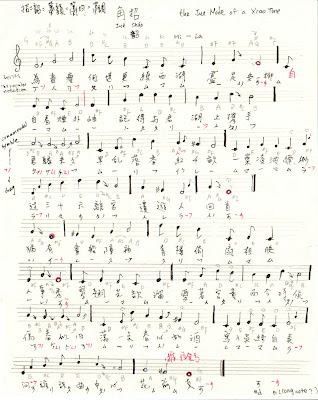 In the spring of 1194, I travelled with Yu Shang Qing in leisurely fashion to the West Lake.
We gazed on the plum-blossom in the western hamlet on Gu mountain:
jade-plum and snow illuminating each other,
the wafted fragrance all-pervasive. Shang Qing returned to Wu Xing.
I followed after along.
Across the mountains hung spring mist. Fresh willows swept the water.
The carefree traveller flew through the flowers.
In a mood of depression I composed this and sent it. Shang Qing was a good singer.
His singing was not professional.
It is my practice to play all the songs I compose myself on the vertical Xiao flute.
Shang Qing, singing on the spur of the mountain, joined in.
It really had the feeling of mountain and forest swathed in mist.
Now I know the grief of separation; Shang Qing has gone to be an official.
I fear this pleasure will not come again.

Translation of the lyrics: (by Laurence Picken)
Because of the spring I am worn thin.
How can I bear again to go round the West Lake where everywhere are weeping willows?
From gazing at the peak beyond the mist,
I remember being with you on the lake, hand in hand,
You went back not long ago.
A thousand acres of fragrant red have fallen early.
A leaf-like boat crosses wavy mistiness,
Traversing the Thirty-six Imperial Lodges, causing the traveller to turn his head.
Still there are on pleasure-boats those who screen themselves behind sleeves,
Green towers where, with fans athwart, each shines on the other, striving in loveliness.
Bright kingfisher-tail diadems gleam.
With care they apply the Palace Yellow paint. But at the present season,
Wounding spring is like the past.
My unsettled spring-heart is like wine.
Writing for the silk of Wu (means the guqin), I play to myself,
Asking: Who can explain the intention of this song?
The friend with me in the presence of the flowers?

Song of Red Love-beans is from the very famous Chinese classical novel [Dream of the Red Chamber] by Cao Xueqin (1715-1763). This Song was singing by the main character, a young man, Jia Baoyu, and the lyrics uses a series of comparison sentences to express the situation of young people in love who are troubled by love.

English translation of the lyrics by David Hawkes：

Still weeping tears of blood about our separation.
Little red love-beans of my desolation.
Still blooming flowers I see outside my window growing.
Still awake in the dark I hear the wind a-blowing.
Still oh still I can’t forget those old hopes and fears.
Still can’t swallow food and drink, ‘cos I’m choked with tears.
Mirror, mirror on the wall, tell me it’s not true.
Do I look so thin and pale, do I look so blue?
Mirror, mirror, this long night how shall I get through?
Oh—oh—oh!
Blue as the mist upon the distant mountains,
Blue as the water in the ever-flowing fountains.

My cello playing or Song of Red Love-beans
Posted by silk on wood 木上絲 at 2:09 PM No comments:

Today I read that Jiang Kui's poem are obviously influenced by Fu (poetry) style. That is, the heart (or the mind) is the object; the object is the heart. And the focus is on both the object and the heart, with the style that the poetry and the prose are as one.

An Xian (Secret Fragrance) preface:
"In the winter of 1191, I took ship through the snow to visit Shi-hu and stayed a whole month. He gave me notepaper and asked for my verses. He also asked for new tunes. I made these two songs. Shis-hu's pleasure knew no end. He caused two singing-girls to practice them. As he found the melodies pure and the harmony agreeable, he gave them the title 'Secret Fragrance'and 'Dappled Shadows'." -- Jiang Kui (English translation by Laurence Picken)

舊時月色，算幾番照我，梅邊吹笛
In former times, the moon's countenance
(Probably on  occasions) has shone upon me beside a plum tree, playing the flute.

喚起玊人，不管春寒與攀摘。
I called my beautiful love to rise regardless of the cold; together we picked the blossom.

何遜而今漸老，都忘卻春風詞筆。
Ho Shun now is slowly ageing. He has forgotten the springtime style of his early verse.
(* Ho Hsun was a sixth century poet famous for his verses on plum-blossom. Jiang Kui identifies himslef with him.)

但怪得竹外疏花，暗香冷入瑤席。
Even now, surprisingly, beyond the bamboos, there are scattered flowers. The fragrance coldly enters the banqueting hall.

江國，正寂寂，歎寄與路遙，夜雪初積。
The River Country is lonely indeed. Sighing I send my thoughts over the long road; the evening snow begins to pile up.

翠尊易泣，紅萼無言耿相憶。
Into the kingfisher-blue wine-cup tears freely flowed; Red-calyx did not speak, disturbed by mutual memories.

長記攜手處，千樹壓西湖寒碧。
Long shall I remember the places where I led you by the hand. A myriad trees screen the West Lake's chill jade-green.

又片片吹盡也，幾時見得？
Petal by petal, all is blown away. When shall we be able to see it again?
(English translation by Laurence Picken)

(Nylon string)
This is a Ming dynasty version which is the most interesting version to me, and it took me a while to accept the melody from the bottom of my heart.
According to the footnote of Se Kong Jue from the Ming dynasty Qin Handbook, Tai Yin Xi Sheng 太音希聲, this piece was composed by Chen Da-bin 陳大斌 who might have lived around the early 17th century. Chen played the guqin for 50 years and published the qin handbook [Tai Yin Xi Sheng] during the Tianqi 天啓 period (1621-1627) under some friends' financial help.
Composer's footnote: The Heart Sutra. Simple words, deep meaning, which can brighten the mind and find one's own true nature. Once the true nature has been found, one can enter the way. If one can actually practice the way, one's character is settled and one's life can be protected. I chant it often and now compose it with the qin. Hoping to convey the lyrics into music, and the soundless meaning into melody, and share this music tablature to a few friends selflessly.

Heart Sutra in Chinese and English (two versions of translation)

行深般若波羅蜜多時，
RP: While practicing the deep, practice of Prajnaparamita.

EC: Avalokita, the holy lord and bodhisattva, was moving in the deep course of the wisdom which has gone beyond.

照見五蘊皆空，度一切苦厄。
RP: Looked upon the five skandhas, and seeing they were empty of self-existence

EC: He looked down from on high, he beheld but five heaps, and he saw that in their own being they were empty.

受、想、行、識，亦復如是。
RP: The same holds for sensation and perception, memory and consciousness.

EC: the same is true of feelings, perceptions, impulses, and consciousness.

舍利子，是諸法空相，
RP: Here, Shariputra, all dharmas are defined by emptiness.

EC: Here, O Sariputra, all dharmas are marked with emptiness

不生不滅，不垢不淨，不增不減，
RP: Not birth or destruction, purity or defilement, completeness or deficiency.

EC: They are not produced or stopped, not defiled or immaculate, not deficient or complete.

是故空中無色，無受、想、行、識；無眼、耳、鼻、舌、身、意；
RP: Therefore, Shariputra, in emptiness there is no form, no sensation, no perception, no memory and no consciousness. No eye, no ear, no nose, no tongue, no body and no mind.

EC: Therefore, O Sariputra, in emptiness there is no form, nor feeling, nor perception, nor impulse, nor consciousness; no eye, ear nose, tongue, body mind;

無色、聲、香、味、觸、法；無眼界，乃至無意識界；
RP: No shape, no sound, no smell, no taste, no feeling and no thought; no element of perception, from eye to conceptual consciousness;

EC: No forms, sounds, smells, tastes, touchables or objects of mind. no sight=organ element, and so forth, until we come to: No mind-consciousness element;

無苦、集、滅、道，無智亦無得。
RP: No suffering, no source, no relief, no path. No knowledge, no attainment and no non-attainment.

EC: There is no suffering, no origination, no stopping, no path. There is no cognition, no attainment and no non-attainment.

EC: Therefore, O Sariputra, it is because of his non-attainmentness that a Bodhisattva, through having relied on the perfection of wisdom, dwells without thought-coverings.

EC: In the absence of thought-coverings he has not been made to tremble, he has overcome what can upset, and in the end he attains to nirvana.

EC: All those who appear as buddhas in the three periods of time fully awake to the utmost, right and perfect enlightenment because they have relied on the perfection of wisdom.

故知般若波羅蜜多，是大神咒，是大明咒，是無上咒，是無等等咒，
RP: You should therefore know the great mantra of prajnaparamita, the mantra of great magic, the unexcelled mantra, the mantra equal to the unequalled.

EC: Therefore one should know the prajnaparamita as the great spell, the spell of great knowledge, the utmost spell, the unequalled spell,

能除一切苦，真實不虛。
RP:Which heals all suffering and is true, not false.

EC: allayer of all suffering, in truth - for what could go wrong?

EC: By the prajnaparamita has this spell been delivered. It runs like this: Gone, gone, gone beyond, gone altogether beyond, O what an awakening, all-hail! This completes the heart of perfect wisdom.

Meaning of the title

Prajna-paramita-hridaya Sutra 般若波羅蜜多心經
般若 prajna means "wisdom" "befor" (pra 般) "to know" (jna 若)
波羅蜜多 paramita means "perfection" or "beyond" (para 波羅) "gone" (ita 多/陰性詞) --> "what has gone beyond, " or "what is transcendent, " or "what (or she who) leads us to the other shore" 到達彼岸, 完滿完成
Prajna-paramita means "perfection of wisdom", and the personified Goddess of Wisdom.
Hridaya means the heart, the core, the essence.
Sutra means "wise saying"

Another English translation of Heart Sutra  from Upaya