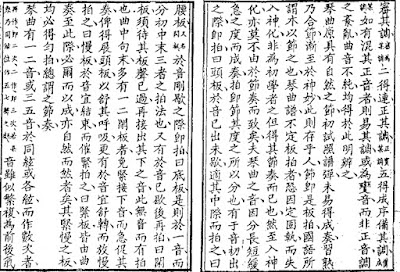 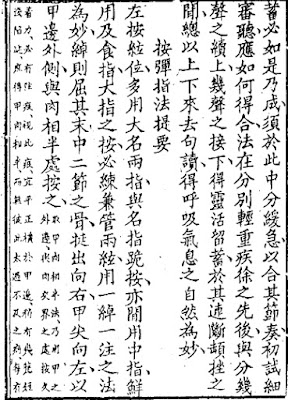 Qin music has a natural "Jie" (Literally means knot or joint, in here it means the beat). When starting to play a new piece by looking at its tablature, one might not feel that it is easy to have the melody sound good. After much practicing and becoming very familiar with the melody, the tempo will then fit in. Gradually, one will then find how wonderful it is, and will understand the tempo.

"Jie" is the beat. Ancient people used wood to make the beating sound. Qin tablature does not indicate beats. That is because qin tablature is made to enable the player’s free mind.  A beginner might not be able to get the tempo right, but once one gets it, a wonderful music will come out.

A piece of music has a combination of different degrees of long, short, slow and fast sounds. The beating system is to control all those degrees. There are different kinds of beats:

These three beats are located at the beginning, middle, and the end of a sound.
Other than that, there is the “Idle Beat” which happens between two sounds, that the first sound has ended, then the beat happens, and then the next sound comes out. It also means there are beat(s) but no sound. An Idle Beat happens often at the end of a phrase in order not to have the next phrase come out too soon and create a rushing energy, and also to give room to breath.
There are also Slow Beat and Tight Beat.

Slow Beat : is to smooth out the music and transition to a slower tempo.
Tight Beat: To hasten the sound from the previously ended sound.
Both Slow Beat and Tight Beat still need to be balanced within the music. And all the beats have to occur naturally.  All of that is called tempo.

A good music is based on the tempo, no matter if it is one or two notes, three to five notes, in one string, or in several strings. The sound might be complicated, but based on the tempo, it can accumulate the energy through to the end. One must distinguish where to slow down, or hurry up and how many notes to stop or to continue by careful listening and analysis. Then using it flexibly in connection and combination. After all, the best is to have a natural breathing tempo through the music. 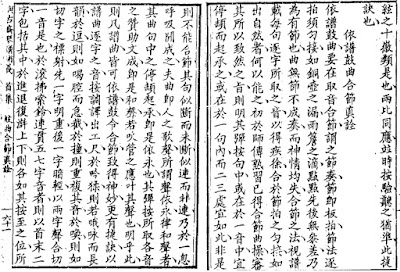 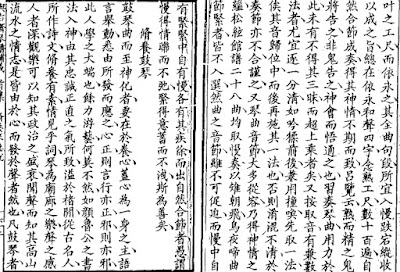 To make sound out of a piece of music, it has to match the beat. The beat should be connected smoothly. It is like when a bronze water clock(*1) leaks out of water, and when the rain drips down the eaves, there are no overlapped drops. That is the tempo, and no single beat is rushed out to take the place of the next beat. If a piece of music is performed without proper tempo, it won't be a complete performance, and there will be no emotion and spirit. How to make the proper tempo? At the beginning, learn from a teacher and then one will understand where to make a pause, and how to connect to the next note smoothly, and how to connect notes in one breath.

For techniques like "gunfu" and "suoling" where the right hand strums several strings, the first and the last notes in one strum should be all on the beat. Techniques like "Jinfu" (up and down), "Tuifu" (down and up) and "Shangxia" (up and down) , each single move up or move down should be counted as one note, and should follow the tempo.

Usually when starting a piece, the beginning tempo is like a slow entering. And the ending is also slowing down (like the Italian music term "Ritardando"). If a qin player can sing the melody with tempo, his or her spirit and emotion will easily enter the proper feeling, and move beyond to a higher level of mind.

It is not required to play a fast tempo melody, but it is required to play a slow tempo melody with a variety of slow beats, and tight beats, and either faster or slower beats should still be within the proper tempo. When you are playing slowly, your emotions are still coherent and you don't feel loose. When you are playing fast, you are keeping your mind concentrated without suddenly coming out of control. Then that is good. 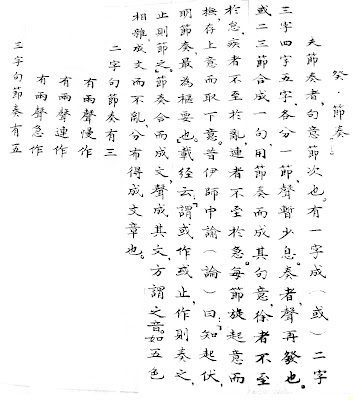 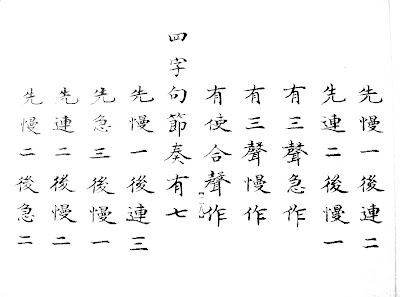 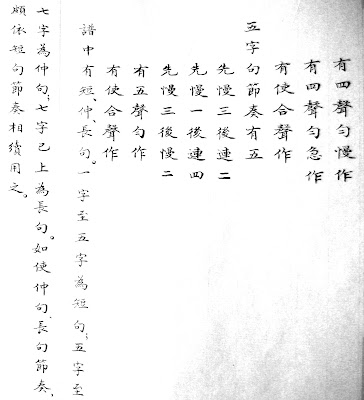 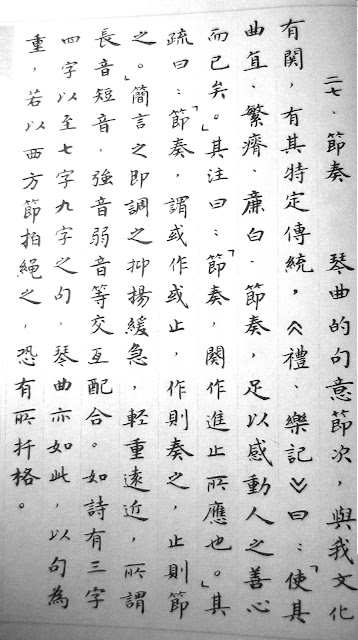 Mr. Yao's footnote on Tempo:
Jiezo (Tempo): The decision to make the meaning of each phrase of a qin music is related to Chinese culture and has its specific tradition. [Li, Yueji]: "Music has up and down melody, simple and complicated notes, loudness and softness, and tempo, those are enough to touch human's kind heart. " The small footnotes have an explanation of tempo, which means where the music should stop or should continue. To make it simple, "Jiezo" includes the combination of fast and slow speeds, heavy and light tones, tight and loose notes, long notes and short notes, strong and soft notes. Much like Chinese poetry has 3 or 4 characters in a phrase, 7 or 9 characters in a phrase, Qin music is like that also. Phrasing is important. If using the western tempo method to limit it, that can be contradictory. 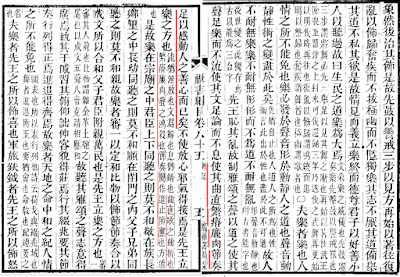 (*1) Bronze water clock: on 2018-12-12, facebook friend Yanchen Zhang pointed out that 銅壺之漏 is not a tea strainer but a bronze water clock. I am very appreciate his correction.
Posted by silk on wood 木上絲 at 12:43 PM